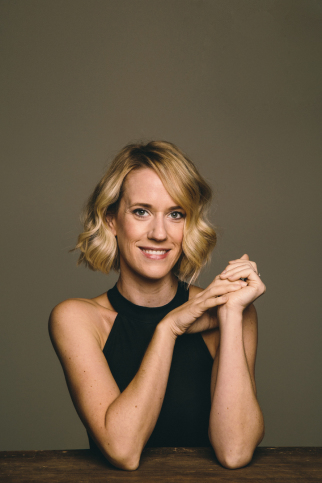 Veronica is a Spanish/ American actress, born in Texas but raised in both Spain and the U.S.

In 2006 she received her BFA in Theatre from Sam Houston State University. A month before graduating she was cast in Stages Repertory Theatre’s ‘Lystrata’ in Houston. That same year, she went on to tour ‘The Taming of the Shrew’ as Catalina with the Mainstreet Theatre Company.

After her tour finished, she moved back to Madrid, and got cast as a company member for Face2Face Theatre starring in the musicals ‘Drockula’ , ‘Dr. Jekyll and Mr. Hyde’ and ‘A Midsummer’s Night Dream’ in the Alcázar Theatre.

Veronica went on to take over the role of Penelope for over 2 years in the musical ‘Mi Madre, Serrat y Yo’. For the past 2 seasons she has worked in the innovative new theatre project ‘Micro Musical’ with the MicroTheatre and Stage Entertainment, performing the box office hits ‘Por Culpa del Amor’ and ‘La Chica de la Curva’.

In 2014 she was cast as Sarah Stone in the musical ‘No Way To Treat a Lady’ and went on to star in the new Spanish musical ‘Tras El Telón’ in the Alfil Theatre.

In TV and Film her most recent work includes 2 seasons on ‘Avatars’ (Disney Channel) and the movies ‘Vampyres’, ‘Wild Oats’,  Nickelodeon's 'Lost In The West' and her most recent role in Movistar + series "On Death Row".

In 2018 she was cast as Shirley Kaplan in STREET SCENE at the Teatro Real in Madrid. For two seasons she has been playing RUTH in the world premiere of the musical "33". Last February she was invited back to the cast of STREET SCENE at the Monte Carlo Opera.

Her latest project has been filming the series "Now and Then" which premieres this May 10th on  Apple TV +.